Taking a mentored walk comes with valuable bush lessons, testing your skill, awareness and senses.
Our morning began wit a roar of lions within a kilometre of camp, we headed off in the direction where we had heard the roars. After half an hour we found tracks on a tricky stony ground and the lessons began on safely, observation and anticipation of the environment.
Take nothing for granted as you may not find the animal you are tracking, but something else.
After following the lions tracks down the river, where they drank and returned back into the bush, and still on their trail, we startled a hyena which ran off. Watching the hyena disappear , we scanned the surroundings and spotted a black rhino bull making his way in our direction.
Wind was perfectly in our favour.
We now had a bodyguard to follow and investigate the hyena activity.
We slowly and silently watched the bull who led us to a few more hyenas, vultures and jackal activity. While observing the interaction between the rhino and the other scavengers, we heard the pride feeding on the remains of a giraffe about 100m ahead of us.
We spent some moments observing and quietly retired without our presence being known.
Sensibility and humanity - Special Moments!!
at September 17, 2020 No comments:

Once constructed with material such as vines, snares nowadays are mostly mad of wire, nylon or cable. 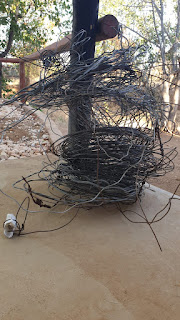 Wire can be made from gold, silver, iron, aluminium, copper, nickel or steel and have many uses in electrical, telecommunication and heat transmission but a similar demand is made by the building industry for fencing, ages, suspension bridges etc.

Although there is a lot of controversy on when and by whom wire was invented, we know that already in the antiquity some wires were used in the jewellery industry (gold, silver, copper). To contain cattleman American farmer - Joseph Glidden - is thought to be the inventor of the today “barbed wire” - which was welcomed by farmers because wooden fences with barbed wire managed to contain their livestock more effectively than wooden fences.

A simple indiscriminate, silent, yet ruthlessly effective circle of wire, one end anchored to a secure base, and a circle suspended over a game trail is all it takes to set a snare. From this point anything that walks through this noose is doomed to a torturous death of strangulation and agony. Snares often don’t kill their victim but leave it suffering - dying slowing or hanging by a bloodied limb until the hunter arrives days later occasional being forgotten. Some animals manage to escape their snare trap, many are injured in the process - losing a paw, limb occasionally jaws.

The challenge besides the raw cruelty of this hunting method is the huge ecological damage it causes to an eco-system. It is non-selective and kills anything from predator to prey.  It is thought that four out of five animals captured in snares are non target species.

This random slaughter causes dramatic imbalances on all, levels, damaging environments and ultimately communities who could be benefiting from their  land rather than losing a potential sustainable source of income, that is in essence a national treasure In certain areas the wire from the western boundary fence of the greater  Kruger national park fences is ironically being used to set snares.

This becomes a political challenge as finances, maintenance, patrols, responsibilities etc, which involves land-owners, communities, conservationists, government and others.

No species is safe. These areas contain some endangered species such as wild dogs, elephant, giraffe, hippo, pangolins, aardvark and so many more, that access the danger of these silent wire death traps.

For each animal within the area that we currently operate in, we aim to create a safe bubble where this threat is lessened even eradicated, so we can move on to create the next safe zone for greater Kruger national park.

And this, hand in hand and with the acknowledgement, empowered of the local community living in the region since many generations.

It can be understood as legitimate for people to take meat from the bush as an essential sustainable resource. But in a world being rapidly sliced up by roads and human land use. The necessity to create area free of snare is now more necessary than ever or there won’t be much to conserve for future generations.

Our operation is not aimed to confront or persecute poachers, our mission is to work with the poachers gaining access to their vast, knowledge and bush skills in keeping wildlife and ancient knowledge life and install the values of conserving in each and every one of us.

Save the wild - One snare at a time! 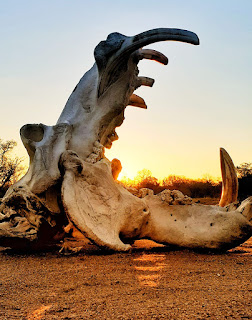 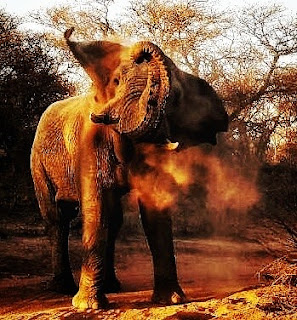